Tucked away in the far south west corner of Wales is Britain and Europe’s smallest city, St. David’s.

It has a population closing on 2,500 residents, a few shops, some restaurants and pubs and, hidden in a small valley below the city, the immense and impressive St. David’s Cathedral.  The village (because that’s what it really is) is called a city because of the Cathedral. Ecclesiastic law and history determined that no matter how big or small, any place that had a Cathedral was declared a city.

St. David is known as the Patron Saint of Wales and has an incredible story—worthy of a book—of his service to Wales in preaching and teaching Christianity. Legends suggest that St. Patrick, of Ireland, was taught by David. His preaching was renowned. Thousands gathered to hear his sermons. Miracles were apparently done in his name.

And so, the Cathedral was built to honour him and to hold his tomb.

It’s nestled in a narrow, sheltered valley for a reason. In the so-called Dark Ages (mid 500’s and on), Viking marauders attacked and destroyed 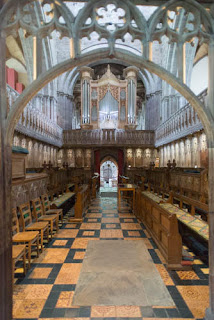 churches along the coastline, killing all the monks and sacking nearby villages and enslaving its inhabitants.

St. David’s hidden location saved it from such deprivations and allowed it to prosper. By the time of William the Conqueror (1066), such was the fame of the Cathedral that a Papal decree dictated that two pilgrimages to St. David’s was the equivalent of one pilgrimage to Rome. William himself made a pilgrimage to the Cathedral in 1081.

Beside the Cathedral itself are the massive ruins of the Bishop’s Palace, indicative of the wealth of the Cathedral in medieval times. During Henry VIII’s dissolution of the monasteries it suffered heavy damage but survived and serves today as an active church and diocesan centre for The Church in Wales (part of the Anglican Communion),

The best view of the Cathedral is from the old stone gateway and bell tower atop the hill by the village. From there you can see the sweep of the valley and the church’s strategic placement.

Stained glass windows and decorative features abound in the Cathedral. If you’re lucky and it is not church service time, you still might hear the organist or even catch the Cathedral choir practising. In The Prince Madoc Secret, the Cathedral plays a key role. But I postulate that, at the critical time in the novel, the Church and the cultural community have gathered to create a special memorial place for Welsh writers, artists and musicians might have their own ‘Poet’s Corner’ such as found at Westminster Abbey in London.

That is one piece of fiction I’d love to see become reality.