In The Lucifer Scroll, an archaeological dig unearths a tantalizing document that hints at the existence of a revered icon, the Holy Lance also known as the Spear of Destiny. It was the spear that a Roman centurion thrust into the side of Jesus Christ at the crucifixion. But it became a spear immortalized by future generations as an icon that allowed its holder to rule the world. 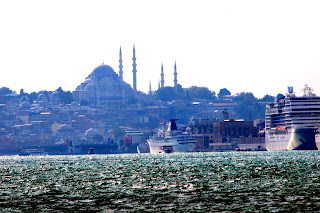 Certainly, Charlemagne and Napoleon believed it and sought it. Adolf Hitler lusted after it. He sent his occult-loving SS chief, Heinrich Himmler, on a search for the spear. Hundreds of thousands of Deutsch Marks were spent on the search, even in the middle of World War II.

One of my protagonists, Professor Huw Griffiths, flies to Istanbul to help an old friend excavate and interpret and old church building they’d discovered in the midst of a huge industrial dig to create a new subway line in the city.

Istanbul is an incredible city, layered with history and tumultuous events, magnificent structures dating from Byzantine times as well as Ottoman. The city straddles the Bosporus, a sea channel connecting the Black Sea and the Aegean. The Bosporus also divides Europe from Asia. 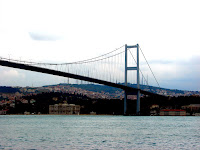 Huw’s church dig symbolizes the city’s violent past, dating from its destruction during the Ottoman invasion of 1453. Hidden beneath the marble altar he finds the provocative document that sparks the new hunt for the spear.

Istanbul is a city of contrasts. Modern high rise office towers sit side by side with white marble mosques. Crowded city streets open into magnificent park-like squares. Modern shops on modern streets lead to the tumult and noise of the Grand Bazaar or the Spice Market. It’s noisy and bustling. And it is quiet and reflective.

High above the old city, on the south side of the famed Golden Horn lies three of the city’s most historic and amazing structures.

Hagia Sophia, an enormous Byzantine Cathedral draped in magnificent décor and once the largest building in the world. Still amazing to see and walk through some 1500 years later. It passed from the Byzantines to the conquering Ottomans who were so awed by the building they turned it into a mosque. It now exists as a museum, open to the public and delicately showing off both the incredible mosaic work of the Byzantines and the scrollwork art of the Muslim tradition.

Hagia Sophia sits between two superb Muslim creations: Topkapi Palace and the famed Blue Mosque which is sparkling white marble. (It’s called the Blue Mosque because of the predominant blue and turquoise décor inside the structure).

Topkapi was the palace of the Ottoman emperors until they moved in the late 1800’s to a newer, more modern structure further north along the Bosporus, called Dolmabahce Palace.

Linking Topkapi, Hagia Sophia and the Blue Mosque is the park-like Sultanahmet Square which itself also takes in

part of the old Byzantine Hippodrome.

History. Culture. Museums. Clashing faiths. Istanbul was an easy choice for a somewhat mysterious, challenging, evocative location to begin the hunt for the Lucifer Scroll.